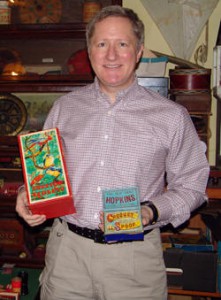 „The photo is was taken at Richard Ballams house in Bury St. Edmonds, England, holding three very interesting games from Richards collection that I do not have in my collection (yet!).“ 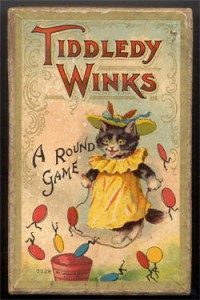 Rick Tucker is also a member of the AGPC

GameCatalog.org is a service of AGPC that is open to everyone, not only AGPC members.  It builds upon the efforts of Rick Tuckers many predecessors who assembled game information based on their collections.  He has added to that in recent years based on his own research and also the information provided by others (including, e.g. the Spears game information derived from their early catalogues).  It also contains links to rules (see item #4)

Rick Tucker: „I have taken about 15,000 game photos so far (very few posted on the Internet yet) and I am still photographing my collection.  Many are intended to be posted online or my personal sites or somewhere else but are not there yet.

In addition to the above, I have been helping to put online on the Internet many rules from the AGPC Archives and some of the game company catalogues. Right now, about 1/3 of the game rules from the AGPC Archives are online; the remaining 2/3 have been scanned by Bill Alexander and are in my inbox/backlog for processing and conversion to PDF and then posting online. In addition to all that, I post online photos from AGPC events.“

About Germany:
„I am hoping to visit Germany for an ESG event sometime in the next year or so.  I have had regular interactions with Rudolf Ruehle over many years and know the Americanski living in Germany, Bruce Whitehill, well.“

About german language:
„Here is an example of something I know how to say in German:  Bitte ein Bit!.   That works well for me in certain situations but Ive only been to Germany twice and not recently.  Another:  Weizenbier, one of my favorite beers, whether hefe, kristall, or otherwise!“   (admin@e-s-g.eu: „Perfect !  That is all you need to survive in good old germany.“)

Looking forward to being engaged in the ESG and contributing to information exchange among ESG members and beyond.